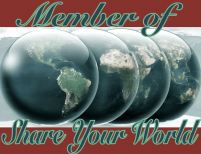 Well, late again, absolutely. This week is Week Five for Cee’s Share Your World series of questions. Be sure to click on the link if you wish to participate. I’m also going to try to share this on Facebook, since a few of my family and friends keep track of each other there. Just to see if it works this time.

As you may know, I have missed Weeks Three and Four, so I am adding them in here, too. If you wish to see what others wrote, just click on the week title and it will take you to the page. That’s a lot of questions to answer, but hey, it’s fun so why not? Here they are:

Given the choice of anyone in the world, whom would you want as a dinner guest? I would have to say Byron Katie. She is a public speaker who has developed a theory of questioning that can help one gain perspective as to how our minds can affect how we feel. When I first ran across her, I admit I thought her methods were bordering on cruelty, having people question thoughts that they have, in some cases,  lived with all their lives. I put it aside and never read another thing. But I found a few videos, saw her in action and eventually something clicked, and I could see the value of what she calls The Work – how it can truly make one look at their fears and anxieties and see them for what they are, most often, thoughts that may have no basis in reality other than in one’s own head. I do still have questions, and feel she would make the perfect dinner guest.

When did you last sing to yourself? To someone else? Oh gosh it has been years! I can’t remember. I do occasionally hum along with music if I’m alone, but singing out loud? I know I’m tone deaf, so my ears thank me when I avoid such things.

If you could wake up tomorrow having gained any one quality or ability, what would it be? Teleporting. Any kind of travel is difficult for me, so I would love to be able to just teleport at will, anywhere I want. I could pop in on my daughters anytime, visit family in Texas, yes, that’s the one ability I would love best. Oh wait, did you mean something realistic? Too late.

What, if anything, is too serious to be joked about? Child abuse in any form. Nuff said.

Where did you live at age five?  Is it the same place or town you live now? When I was five I lived in two places. We had a home in a neighborhood that ended up in the way of a new freeway being constructed, so apparently my parents were forced to move. I don’t know if they owned the house at the time or rented, I just remember that it was a Big Deal to them. We moved into an apartment building for around six months, while our new home was being built. The apartment building had a central courtyard, mostly grassed in,  surrounded by four walls of apartments. I was not allowed outside that area without my parents. I also had to share a bedroom with my brother, which I didn’t care for, but I knew it wouldn’t be for long. My dad, an architect, designed out new home and often took us to see the house as it was being built, starting with frame and slowly building up. It was such a thrill, that house became home before we ever moved in.

You are invited to a party that will be attended by many fascinating people you never met.  Would you attend this party if you were to go by yourself? I would not attend the party at all. I don’t like parties. Aside from the current physical difficulties that would impose, I have never been a party person. I prefer small gatherings of up to 4 or 5 friends, where one can talk and discuss interesting topics. Anything with “many” people, regardless how fascinating, is just too much for me.

Did you grow up in a small or big town? Did you like it?  I grew up in a city – Houston. I liked it at the time, enjoyed having options, but it was much smaller during my childhood than it is now. I think that, socially, I am more of a small town person. Too much traffic and other problems in a city these days.

As a kid, what did you want to be when you grew up? For a long time I wanted to be a teacher. I loved school, and even homework. Yes, I did. Because homework was just another venue for my imagination. I would pretend to teach myself as I did homework – mentally playing the part of student and teacher at the same time. My books open, I would explain the homework assignment, and tell my student how to solve the problem or give other instructions, whatever it was. I was the teacher, explaining and teaching. Then I would switch to being the student, do the homework, and after, I’d be the teacher again, checking it and correcting anything that needed it. Sometimes I would raise my hand and ask the teacher a question. I always gave an answer as the teacher. I was a good teacher, lol! And it made homework fun.

Do you prefer shopping or going to a park? Well, that depends on the shopping. Amazon is great, lol, I was never fond of going shopping unless it was for books, videos, and music. Now I can get all that online, so the physical challenges are no longer a problem. Going to a park, though, sounds pretty wonderful at the moment, with snow for the past couple of weeks. The idea of strolling through a green park perhaps filled with flowers, is really a nice thought.

If you were a shoe, what kind would you be and why? Definitely some kind of house shoe, comfortable and worn.

What’s the story behind a time when you got locked out? I don’t think I’ve ever been locked out of anything. Not that I remember.

Do you prefer eating foods with nuts or no nuts? It depends on the food, but I would say with. I love nuts or seeds in salads, or chopped nuts on ice cream, for example. Brownies with nuts. Yes, nuts. Now I’m hungry for some!

That’s all, three in a row. To any who have had the patience to read through them all, thank you for visiting!