I’m starting with this, because I wrote it by request for my daughter’s blog, Inspire Project, and it seems a nice place to start. My forth-coming memories may not be as inspired as this one, no promises, but I wanted to start out my RAM project with something uplifting.

This may be a sweet little story, fun, but sweet, too. It’s something nice I did, that inadvertently brought me something even nicer in return.

After I moved to Switzerland and began to speak French most of the time, I got so used to it, I often even thought in French. One Saturday I was in the city shopping, I’d had lunch, and browsed my favorite stores, but now was heading home. I was feeling rather low at the time, thinking of my family in Texas, feeling a bit out of sorts. After 10-12 years living in Switzerland I still had the occasional bout of homesickness.The shopping trip was supposed to make me feel better, but thus far, nothing was working.

As I walked into the train station, I was planning dinner in my head, making a mental list of items, in French. I saw two elderly ladies standing in the middle of the station, looking bewildered. They were looking all around at the different exits, the flow of people, and they appeared to be completely lost.

On impulse, I walked over to them and asked (in French of course) if I could help them. They looked up hopefully, and asked, “Do you speak English?” I smiled and said yes. They then asked me directions to the Metro. Simple enough, right? 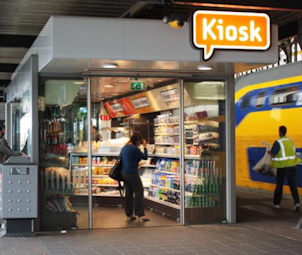 Well, maybe not. You see, some things I learned in French, I had no corresponding reference in English. This was back in the 80’s and I’d grown up in Texas, and had never seen, for example, a kiosk/newsstand. The best directions to the metro involved telling them to go past the newsstand and turn right, and so on. I couldn’t think of what a kiosk was called in English. And my mind was having a kind of slow reaction to switching over to English. So, when giving the directions, I fumbled a bit. You know, “you have to go past the, um, what is it, the, oh never mind I’ll show you.”

So I walked them to the metro a short distance away. No big deal, but I remembered what it was like feeling lost in a country where you don’t know the language. They thanked me profusely, and I smiled and told them to have a good day. Then one of the ladies looked up at me and patted me on the shoulder and said, “and you know, you speak very good English!”

I could have corrected her, told her that English was my mother tongue, that I’d spoken it for the first 30 years of my life, but it felt right not to tell her, just to thank her and say goodbye. But that one sweet comment, mistaken but sincere, lifted my heart on a heavy day. It brought a touch of humor that stayed with me, and now, some 20+ years later, it can still bring a smile to my heart.

As simple as the encounter was, it felt good to help them, made me feel good. And it was lovely to hear a touch of “home” in their speech.

But their mix-up, thinking I was from Switzerland, also brought me a shift in perspective. I felt an odd sense of pride that they thought I was Swiss. And feeling that, I realized something I had been missing all day, a feeling of home. Sure, I missed my Texas family, but my home was now in Switzerland with my husband and two daughters. And that was the day, more than any, that I fully embraced my Swiss-ness.

From a small gesture of kindness, to a funny remark, to a realization that I truly belonged where I was, all in the space of a few minutes. But even without that realization, just seeing the relief on their faces, the smiles of thanks as they stepped on the metro, it taught me something else, too. That the quickest way out of feeling low, is to help someone else, do something kind, however small.